The photograph has this veracity to it; the sense of documentation of a reality, yet the reality we present is an illusion, a mask.

Deconstruction exposes that assumption of the ‘real’ by blurring the boundaries between the painted canvas, perceptions of dimensionality, and the photographic portrait.

The ‘real’ persona is a collection of ways of being that is contingent on relationships and connections with multiple people. We fabricate a persona ourselves, and are moulded by others in response to the outside influences that bombard us in our daily lives. The self is a product of a liquid performance, a pliable construct. There is no core reality, no permanent self, but many realities of moving boundaries constantly being negotiated between others and ourselves. The identity of self is those images and masks.

There are no real people in these photographs, there are only masks that each has chosen for themselves. The painted people, exposed and deconstructed are a fabrication of assumed truth, revealing that reality is nothing more than a performance. A performance that points at the limited nature of the visual world, and in the performance a drama unfolds, unmasking representation as a facade.

“The photograph thus becoming itself the mask concealing… thwarting confrontation with the real.” 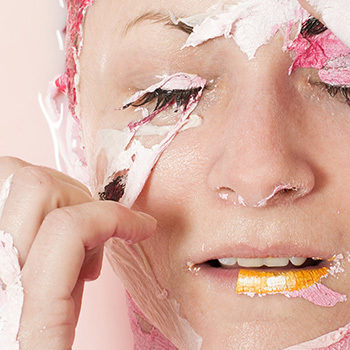